The company Plaimar, was established in 1918 by Mr Hugh Plaistowe.   Hugh Plaistowe was born in London, the son of a confectioner and it was as a confectioner in Perth that he began distilling essential oils for use in his own products.   He was quite successful in the distillation of essential oils, including sandalwood, cloves and of course Boronia  and over time he went on to produce a variety of other products using his essences such as cordials and even a product used to protect  sheep from insect attack.

In 1922 Plaimar sent some of their Boronia essence to London where they arranged for a chemist to produce a perfume from their product, the idea being that they would then produce the perfume back in Australia to the formula prepared by the chemist.  This they did with the perfume becoming commercially available in 1923.

In London in 1924, King George V and Queen Mary attended the British Empire Exhibition where the Queen was presented with a bottle of Plaimar Boronia Perfume.   The cut glass bottle had a stopper made from gold in the shape of a kangaroo; the bottle also had a black swan, the emblem of Western Australia, painted on the front.   Bottles (but definitely not as elaborate) were offered for sale from the Western Australian stand at the exhibition. 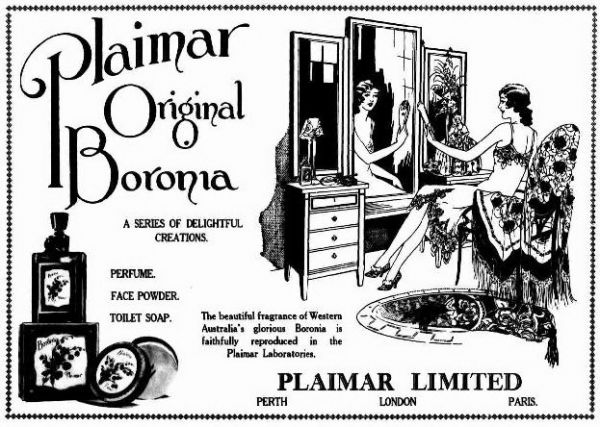 Plaimar’s Boronia perfume and powder were advertised for sale from 1924 onwards and advertisements frequently carried the words Perth – London – Paris.       Hugh Plaistowe died in 1935 and after WW2 Plaimar Boronia perfume and powder seems to have just faded away.   The firm continued to advertise that they would purchase Boronia blossoms right into the 1950s so it seems that they concentrated on making the essential oils and left the manufacture of perfume and cosmetics to other, perhaps larger firms.

Known fragrances of this company